Serbia spreads its connections to the world! 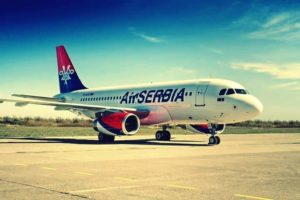 Air Serbia officially confirmed that the company will launch six new routes to destinations in Europe and the Middle East in 2020.  The new lines are expected from the 1st of  June 2020.

Air Serbia plans flights to Geneva three times a week (Mondays, Wednesdays, and Fridays), while it will fly to Florence twice a week (Tuesdays and Saturdays).

In addition to the new routes, the Serbian airline also announced that it will increase the number of flights on existing routes such as Prague, Zagreb, Tirana, Skopje, Bucharest, Ljubljana, Dubrovnik, Tivat, and Larnaca.

The most interesting thing is that Air Serbia plans to increase the number of flights to Istanbul, the destination to which it started flying two months ago, and from April instead of three times a week, it will fly as many as seven times.

Constantine the Great Airport in Nis

Air Serbia is currently flying to Vienna, but direct flights to Thessaloniki and Istanbul are announced as of March 2020.

There are ongoing conversations with other companies that want to operate passenger and transport flights from that airport.

or by e-mail: avio@magelan. rs