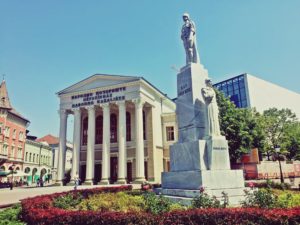 We arrived in a small town called Subotica. After a short walk from the arival place, we reached the center, where we had a wonderful view: in the center was standing a monument to King Jovan Nenad; A little further from it was located the most beautiful building with columns in the typical Italian style is the National Theater; Next we saw the City Hall, which looked like a gingerbread house and it was the first place that we decided to explore from the inside. 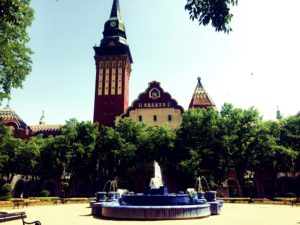 The building was made in the style of the Hungarian Modern Art, and on two different sides were tiled blue and green fountains. From inside, all windows had beautiful picturesque drawings, and then we went into the main hall of the building: in front of us were standing seven royal armchairs, and in front of them was a long table; Behind these chairs, on the windows were painted Maria Theresa and Franz Joseph. The guide told us, that various celebrations such as weddings, for example take place here. 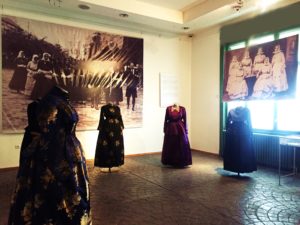 Our next stop was the Museum, where was the exhibition of paintings, hats and national costumes of the 19th century. It was very interesting, for a moment I wanted to get into the 19th century and try on all these dresses and hats, to feel like one of those ladies passing through the ancient streets of Serbia.

Next we reached the Gallery of modern Art. The building was made in the Art Modern style, with an unusual combination of colors and a playful form of the facade, interior and courtyard. Unfortunately, we could not get inside, but the exterior of the building clearly showed that we undoubtedly need to go inside, so I think I will definitely come back here again to see this gallery from the inside. 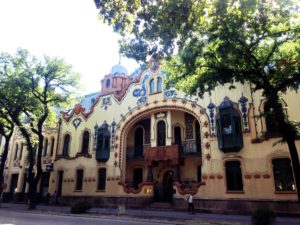 After such a small walk we decided to visit a small restaurant, located on one of the narrow streets of this wonderful town, with a comfortable interior and, clearly, awesome cuisine. 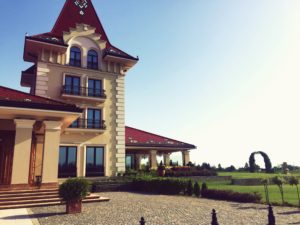 When we finished to enjoy the lunch, we went to the Winery called “Zvonko Bogdan”. And it was something amazing. Having entered the territory, we moved along a narrow road, and on both sides everything around was green. And when we have reached the building, we were left open-mouthed: the house looked like in a fairy tale, and  grape fields were everywhere around. It was something incredible. Entering inside, we went to the tasting room, which looked like a royal mansion with an incrediable view from the window. 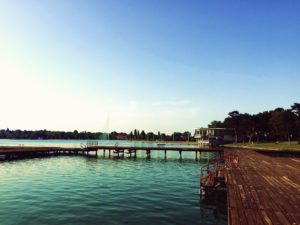 Having enjoyed the aesthetics of this place, we headed to the Palitsa Lake. The area around takes 20 kilometers, and along the banks there are various cafes and restaurants. Also sometimes there you can see kayakers, and sometimes it`s intresting observe over them.

This day was wonderful weather, so we were lucky. It was a trip that will be hard for me to forget it. Subotica is a city of incredible beauty, an amazing combination of architecture of artists from different countries, and just a cozy place that everyone has to visit.